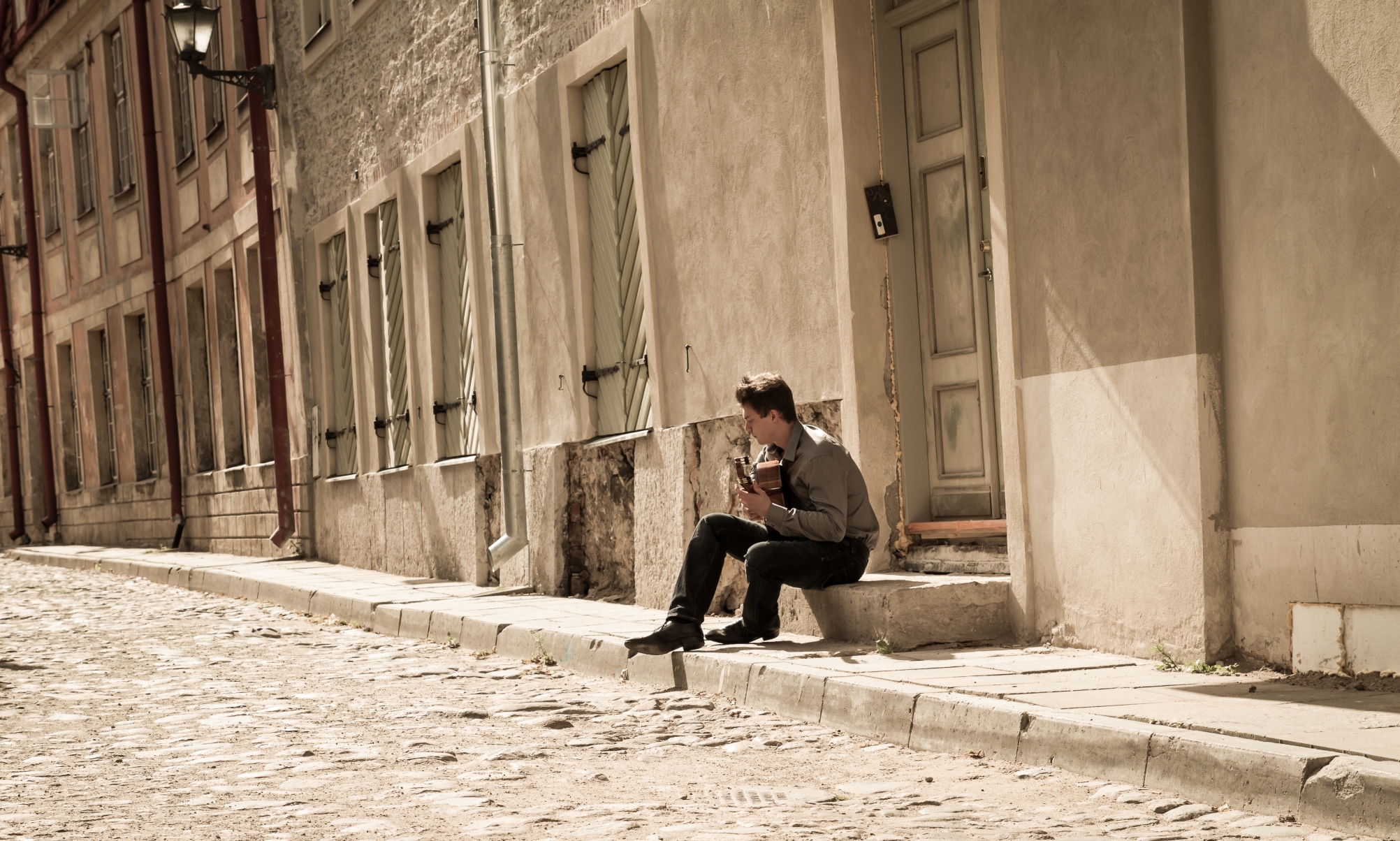 Concert and performance on Estonian TV in Tallinn 2013

11.11.2013 I played at the Estonian National Television. Program was about the “Fiesta de la Guitarra” festival in Tallinn. Organisers of the Festival gave an interview and after I had to play two pieces: one straight after the interview and another in the end of the program.

Previous day I had an amazing concert experience at the Estonian Song Festival Grounds, which is a historically important place. Concert was at 17.00 and at that time it was already dark outside. The stage is situated on the second floor. That hall is very wide, but short. Chairs were divided in three groups: in the front of the stage on left and on the right diagonal. There was putted large platform of beautiful calm red color with stairs for performer. All the place is renovated and looked chicly. Different possibilities of light. Behind me was about 7 metres high half round wall made of glass, so actually one could see the alley going leading to the sea and coming and going ships, city and harbour lights. Very beautiful scenery. Concert lasted altogether about 1 hour and 25 minutes with 10 min break in between.

Next morning I had to wake up at 4.45 and be at 6.00 in the city centre to go to the TV studio. It was already third night, that I slept only something like 5 hours. Quite tiring… I had the performance at 7.20. They putted me some makeup. In strong light of the cameras it was quite hot. The first piece I had to play, was a spanish music, so actually gave me an inspiration. Bright light and hot air… Felt like I was in Spain :-). There were cameras filming from different ungles. One was on the long bar, filming from higher point and moving effectively here and there taking interesting ungles. Other was just stable camera on the wheels, which was moving from side to side. The third was taking some common picture. Few tv screens were on the walls of the studio, so you could see yourself. Maybe not all people know how the studio looks like. While I was performing, friend was standing in 2 metres from me and guide of the happening was walking in the front of me. A lot of cables around. So it is actually funny feeling how everything looks on the TV and what is really happening in the studio. Between the two pieces I had a bit more than a one hour break. I was walking here and there, practising in dressing room. TV team were very nice and pleasant people, who created friendly atmosphere in studio. When the show presenter said “and now we are going to listen for some nice guitar music” I had to start playing. The first 10 seconds went smoothly, but then I felt, that the tension grows. Heart began to pump strongly. I felt how my guitar moves a bit reacting to the beats of the heart. One very rarely experiences something like that! 🙂 Then there were places, when I again felt myself at ease. Usually these were the places in the piece, what I practised a lot before and somehow just felt very confident in how they will go.

Analysing afterwards these two videos helped me to find out my weakness. I had to play live and in that case you have only one chance. Of course you become nervous performing in the front of the cameras for thousands of people watching you! Maybe just few people (guitarists, of course, who else! 🙂 ) could notice errors in playing. Here I would like to say, that musicians have “different ears”, than common people, so when they listen, they usually concentrate too much on technique, so they miss a chance to enjoy the music. But let professionals work on their weaknesses and become better. You have to give them chance to be better, so that is how we develop our society and become better and more successful people in general. I don’t know any great player, who would have jumped immediately from the beginning into splendid carrier. It is not possible, believe me. In the beginning you have to go through the wins and failures, building up your bases, sometimes making mistakes, but after, analysing them and becoming better. Being a musician it is not just practising playing. It is much more.

I am very thankful to my guitar teacher, who made me better musician, who was always helping and giving advices how to become a better player. I feel, that I owe him 80% of my musicality and technical achievements.

So, what I got out of the performing on TV? Practising at home same situation, what is going to be at the studio is, of course, important. But not crucial, in my opinion. It might give you some extra 10% of confidence. Something like putting your concert suit and imagining how presenter is announcing you. But here are few things, that work for me. Few seconds before I have to play, I like to put my fingers ready on the strings and close my eyes and actually at all what helps me is playing with closed eyes. As one successful player told me “You actually don’t need to look at your hands. You just imagine, that it helps you, but you are just fooling yourself”. I understood what it means only year later. I found out, that if you know the piece, your hands and fingers find the correct positions. Practising with closed eyes makes you feel the correct moves. So you play without any extra unnecessary moves. Move your hands and fingers only in direction you really need for achieving some certain effect in your playing. The use of your eyes is secondary thing. Audience use their eyes to watch the artist on the stage, but YOU have to play. All the more so, guitar is not a big instrument and if you have been playing for many years, believe me, your hand and fingers WILL find places in every difficult position! I think, that is the correct way to play and clean your technique from all the rubbish. Not probably the only way but one of these, which work for many musicians.

Have you heard of mental practising? Probably there are few ways of it. But one is imagining yourself, playing like if you would watch a movie, where you act. Imagine every note you play and every sound you produce. I know, it is very difficult to start practising in this way, but it gives amazing results! Just start little by little. You might start by learning to play 1 minute long piece in this way. The more you practise like that, the more easy and common it becomes. I really began to enjoy practising without the guitar. But of course, I am a bit exaggerating, because I feel pleasure by pressing the strings and plucking them, producing soft and sharp sound, playing with the colors and the creating different phrases. But just want to let you know, that you have to learn to love also difficulties of your profession. Without this skill you will be unhappy player.